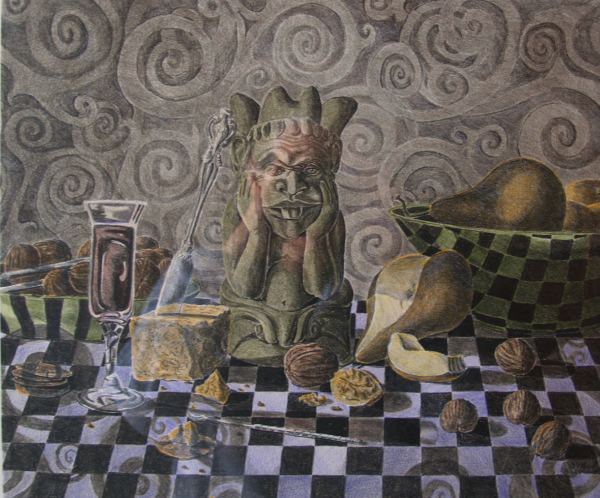 “The Gargoyle’s Visit” was created with master printer, Mike Sims at the Lawrence Lithography Workshop when it was based in El Paso, TX. This lithograph is an attempt to create an atmospheric, yet naive or childlike drawing to accompany a child’s fairy tale. The lithographs are hand-colored and each is different. In this particular print, the gargoyle is still changing from flesh and blood to stone.

When a print is ordered, you receive a hand colored print, a copy of the fairy tale and a block printed cover sheet with a gargoyle image.

You should know that in this enchanted country, once every century the gargoyles that sit in the tall castle towers come to life and wander the land. Despite their fierce appearance, the gargoyles aren’t evil. They are the protectors of their villages as well as keen observers. During their centenary night walk the gargoyles can decide to re-enter society by choosing someone to take over their watchful guard, someone who would benefit from 100 years of watchful silence.

Garrison Read (G.Read) waits for his next meal while sitting at his dining room table. Outside storm clouds engulf the setting sun, their dark shadows slinking across the fields and forests of the broad valley. Nestled against the darkening forest, a cluster of cottages and shops are dwarfed by an old castle with it decaying tower. Poised on the highest precipice of that weathered tower is a small gargoyle, the village guardian. G.Read resides within that old fortress. At one time he was a generous and happy man, but he, along with the other villagers, had grown fearful and isolated. Decades before a violent incident had embedded fear and suspicion in them, causing their hearts to close along with their doors. Visits between neighbors are short and to the point. The only person G.Read sees with regularity is his housekeeper and cook, Anna Sistant. She arrives after sunrise and leaves before sunset. After dark, there is an uneasiness in the village although the reasons are unexplained. The isolation has caused the old stories of magic and miracles to become faint dreams, so G.Read has little premonition that on this night his life will change forever.

The storm continues to rage through the deserted streets as G.Read sits alone in the castle dining room, having finished another huge meal. There is a knock at the door. Opening it, a wet and dirty dwarf-like man stands and asks for food, “Perhaps just a bit from your table.” The fearful and indignant G.Read shouts, “Away with your!”, slamming the door in the man’s face. Shortly thereafter the storm abates and the castle is enveloped in thick swirls of fog carried on a cold wind. Full to bursting from his meal, G.Read sits the slice of pear on the table and rests his head in his hands as a cold chill runs through his body.

At sunrise, Anna enters G.Read’s castle, but he is nowhere to be found. Her search reveals everything in order: the table set as she had left it the night before, except now sitting upon the checkered tablecloth among the wine, walnuts, pears and cheese, is a curiously familiar gargoyle.

Later that morning Frederick Read (F.Read), a brother of G.Read’s, arrives. A friendly fellow, F.Read asks Anna to plan a banquet for the whole village. Meanwhile, he begins repairing the old stone castle, first by setting the new gargoyle in the sentry position in the tower.