On keeping things in perspective, I’m sharing this piece of wisdom which came to me via a daily newsletter from Mr. Hubbell. I don’t think he would mind if I share his comments along with Carl Sagan’s.

In 1977, the US launched the interplanetary probe, Voyager I. By 1980, Voyager I had passed Saturn and was heading to the outer reaches of our solar system. The great science communicator, Carl Sagan, proposed that NASA/JPL swivel Voyager I to look back at Earth to take one last photo of our home planet. After initial resistance from NASA, Sagan got his wish. Voyager I took one of the most important photographs in human history: A picture of Earth from a vantage 3.7 billion (can that be correct, 3.7 billion?) miles away. The resulting photograph shows Earth as a tiny dot suspended in a sunbeam. (The “sunbeam” is a band of sunlight reflected in the camera lens.) Carl Sagan published a book about the photo, “Pale Blue Dot.” In his introduction, Sagan wrote movingly about seeing Earth from interplanetary space. It is a beautiful reflection on our place in the cosmos.

Look again at that dot. That’s here. That’s home. That’s us. On it everyone you love, everyone you know, everyone you ever heard of, every human being who ever was, lived out their lives. The aggregate of our joy and suffering, thousands of confident religions, ideologies, and economic doctrines, every hunter and forager, every hero and coward, every creator and destroyer of civilization, every king and peasant, every young couple in love, every mother and father, hopeful child, inventor and explorer, every teacher of morals, every corrupt politician, every “superstar,” every “supreme leader,” every saint and sinner in the history of our species lived there — on a mote of dust suspended in a sunbeam.

The Earth is a very small stage in a vast cosmic arena. Think of the rivers of blood spilled by all those generals and emperors so that, in glory and triumph, they could become the momentary masters of a fraction of a dot. Think of the endless cruelties visited by the inhabitants of one corner of this pixel on the scarcely distinguishable inhabitants of some other corner, how frequent their misunderstandings, how eager they are to kill one another, how fervent their hatreds.

Our posturings, our imagined self-importance, the delusion that we have some privileged position in the Universe, are challenged by this point of pale light. Our planet is a lonely speck in the great enveloping cosmic dark. In our obscurity, in all this vastness, there is no hint that help will come from elsewhere to save us from ourselves.

The Earth is the only world known so far to harbor life. There is nowhere else, at least in the near future, to which our species could migrate. Visit, yes. Settle, not yet. Like it or not, for the moment the Earth is where we make our stand.

It has been said that astronomy is a humbling and character-building experience. There is perhaps no better demonstration of the folly of human conceits than this distant image of our tiny world. To me, it underscores our responsibility to deal more kindly with one another, and to preserve and cherish the pale blue dot (for human existence and the lives of so many species), the only home we’ve ever known.

Well, that was fun. Home from 2 weeks as Artist in Residence at Homestead National Monument of America .  It allowed me to experience the site and see what kind of work evolved. You can view the initial work HERE. I’ll post the an oil painting in spring of 2020.

Homestead National Monument of America is excited to announce the artists chosen for the 2019 Artist-in-Residence program. This is Homestead’s eleventh year offering artists the opportunity to live at the monument and create works of art inspired by the Homestead story and its environment.  Homestead is just one of many National Park Service sites that host resident artists to help connect visitors with the park’s meanings using a variety of art forms. Plan to visit the monument this spring through fall to interact with this year’s Artists-in-Residence while they work and create.

This year nine talented artists have been selected to live and work at the monument. They are:

“The Artist-in-Residence program is extremely valuable.  It gives park visitors an opportunity to not just see Homestead and its story themselves, but see it through the eyes of the artist, which can be very moving and powerful,” stated monument’s Superintendent Mark Engler.

Remember, Homestead National Monument of America has an exciting schedule of events planned for 2019. Keep up with the latest information by following us on Twitter (HomesteadNM), Facebook (HomesteadNM), and Instagram (HomesteadNPS).

Homestead National Monument of America is a unit of the National Park Service located four miles west of Beatrice, Nebraska and 45 miles south of Lincoln. Hours of operation are 8:30 a.m. to 5 p.m. Monday through Friday, and 9 a.m. to 5 p.m. Saturday and Sunday. Admission is free of charge. For additional information, please call 402-223-3514 or visit http://www.nps.gov/home/. 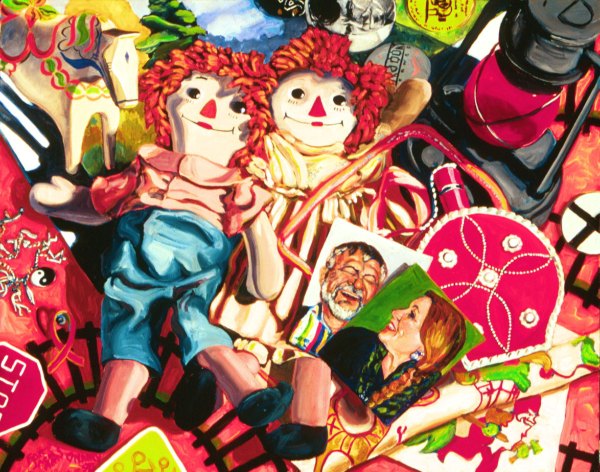 There a lovely synchronicity when two lovers leave their mortal coils nearly together. Jack Ozegovic died on a December Saturday and Ann Carlin Ozegovic died the following Monday. Both were wicked smart, active, inquisitive, funny, social, opinionated but good listeners and wonderful artists. Their home was welcoming and their frequent gatherings were salons where you met interesting folks, discussed ideas amidst gorgeous art with a spread of delicious food on the table. Jack and Ann had an amazing cadre of friends who, at the end, stepped up to help them keep the faith that health would return, and once that was no longer possible, those same friends supported Jack and Ann on their journey out.

No longer will we see Ann out exercising, registering voters, singing in the choir or Jack calling to say they’re celebrating Tito’s birthday or to announce a meeting of his Men’s Intellectual Improvement Group. Many of us will miss them dearly.

I painted this oil of Jack and Ann Carlin Ozegovic about 20 years ago.

My work was shown in the summer of 2018 Hannibal, Missouri’s Hannibal Arts Council exhibit space. My co-exhibitors were delightful St. Louis artists, Ben Bradshaw, ceramist, and Bryan Payne, doodler and found object seeker. Their careers will be worth following.

Women standing up for their rights. 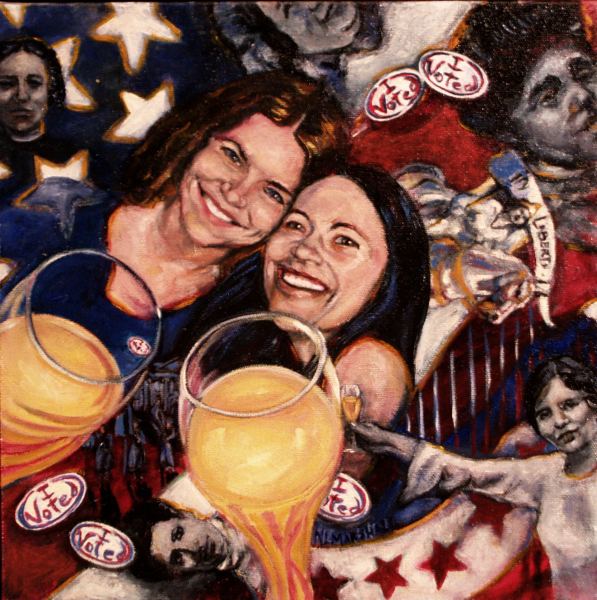 Celebrating Women’s hard won right to vote in the USA

The two young women toasting their right to vote in the bottom painting are the same women who joined several million folks around the world to protest the proposed rollback of hard fought rights for women and for the environment with the 2016 elections. The national movement to gain women the right to vote took 72 years. You can learn more about it here.

The largest remaining stand of tallgrass prairie is found in the Flint Hills of Kansas and Oklahoma. The Flint Hills Discovery Center Foundation has created the Maps in the Schools project. The maps will hang in the schools of the Flint Hills showing their particular location and, depending on the grade level, speak to some special aspect of the place, the life, the history and/or the science. 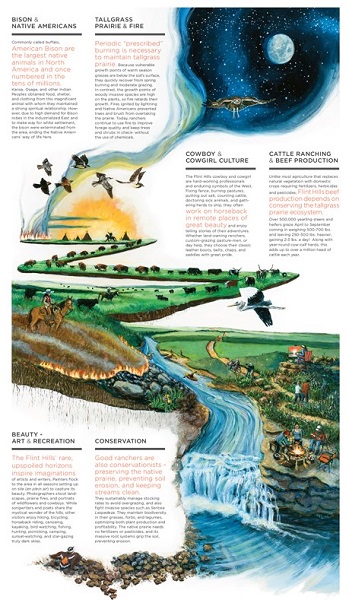 The Flint Hills Maps in the Schools, High School Illustration

The Flint Hills Maps in the Schools, High School Map 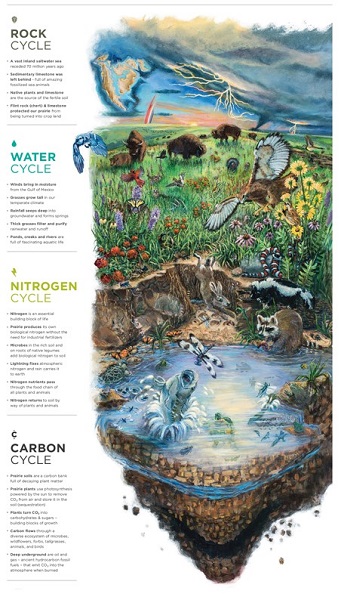 There are over 50 things to identify in this Middle School illustration. An ID chart will be available in the educational materials that accompany the maps. 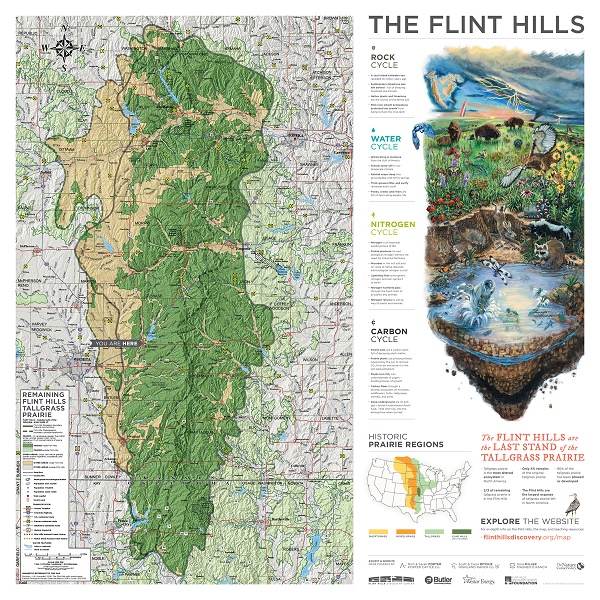 The Flint Hills Maps in the Schools, Middle School

The Flint Hills Maps in the Schools Project, Elementary Illustration

The Flint Hills Maps in the Schools, Elementary

George Paley died this week. What joy he brought to his friendships. Encouraging, always curious, he loved sharing his ideas and projects with others. You could join him in the journey or not. While exhibiting casualness and a wry sense of humor, he brought a vital energy and creativity to his endeavors. His efforts were full throttle forward. Many will miss George terribly, but will take a deep breath to shrink the lump in our throats, and be grateful for his love and his friendship.
This is a link to Joanna Hlavacek’s lovely tribute to George and Judy in our local paper.

Sally Piller in the Flint Hills

Yesterday a friend updated a group on Sally’s health status, so I knew she was in hospice. But upon hearing of her passing, a somber cloud settled around me. Now her delightful presence and fun company will be only a memory. Described as a force, Sally was willing to jump headlong into whatever project captured her imagination. She was a skilled artist who produced superb work; strong, beautiful prints. One of the reasons I love and will always admire Sally, is the way she made me feel about myself and my work. She lifted my spirit with her attitude. I bet she’s pissed about dying before she was ready and, frankly, I’m a little pissed too. Sally’s work can be seen here.

An Eye for Beauty; a gift from our ancestors

Dennis Dutton, an arts philosopher, presents this Ted Talk on understanding beauty. His proposition is that beauty isn’t cultural or in the eye of the beholder, but a gift from our ancestors handed down through a million years. Beauty is an evolutionary gift that aids our survival.

This is one of four wooden counter tops that I’m building with the guidance of Jay Hindley, the ever patient and knowledgeable instructor in my woodworking class. The wood is recycled hardwood semi-truck flooring and the maple was once a gym bench. A small amount of trim work is still to be done, but I’m so pleased with the results, I’m posting. Another post shows a dining room table using the same materials. That table began as a counter top, but after deciding not to use wood around the sink, it was redesigned and now sits in the Zimney dining room.